Full transcript of Fogninis post-match interview in Stockholm: ”They booed because the Swede lost”

Fabio Fognini was booed out by the Swedish tennis audience in Stockholm open after his win over Elias Ymer in the second round, perhaps because of his wild celebration after he claimed the win. The show continued to say the least afterwards when Fognini left journalists in despair.

– I don’t care about Ymers potential, it’s not my problem, Fognini said in the post-match interview.

There is a lot to say about the career of 27th ranked Italian Fabio Fognini. Fantastic efforts on the tennis court have come to the fore for various scandals and spells.

Although the Italian won a very even and dramatic match against home player Elias Ymer, and therefore qualified for quarterfinals, it was an extremely irritated Fognini who met the press just over an hour after the match.

What do you have to say about the match?

– I’m in the quarterfinals so i’m probably more happy than him (Elias Ymer), for sure.

How was the level of play in your opinion?

– Very tough, every match is different. I started very bad but won the first set. In the second set I played a really bad game on my serve and the third set was a fight.

Was the level of play from Ymer what you expected?

– I will say that he is still young and need to work already.

What potential do you see in his game?

(Reporter laughs), But can you see…

What do you have to say about the fans?

– It was nice, I was playing against a home player so I think it’s normal. I have to be happy because I’m in the quarterfinals for the first time in Stockholm Open and I would like to enjoy this match.

How far do you aim with this tournament?

What happened during the last point? You celebrated a lot and the crowd started booing.

– Yeah, maybe because he lost so probably they were like that because he lost. I repeat, it’s not my problem, I won the match and I’m happy. If you have to ask him something about me or about somebody else, I can’t answer you.

But you are ok with the crowd booing?

– Perfect. It’s their fault because I won the match and I don’t care.

With some distance to the US-Open incident, what is your comment now after what happened with the penalty?

Youtubeclip from the interview. (Watch from 1:14) 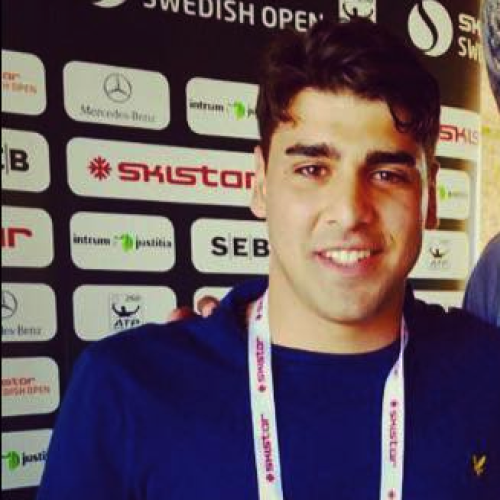