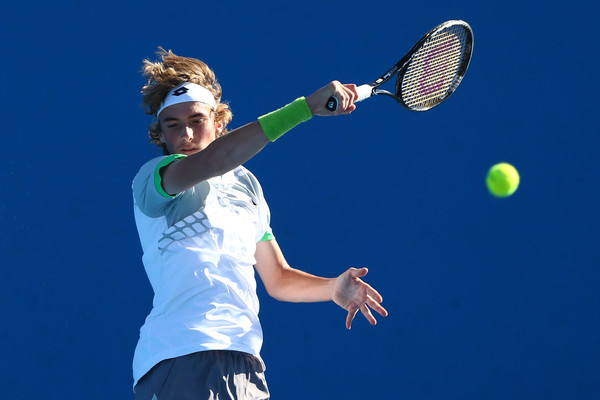 Stefanos Tsitsipas is currently ranked as the world’s 17th best junior and perhaps the greatest talent Greece as a tennis nation has produced.  Tennisportal Editor Alex Theodoridis got hold of Stefanos through Twitter.

Stefanos Tsitsipas has played tennis since he was 6 years old, and he usually trains in Glyfada Tennis Club in Athens when he is not traveling and competing around the world. Although he is now trying to break into the senior level, Stefanos has a genuine interest in tennis.  In his spare time he voluntarily runs the Facebook groups TenniscoreITN and TenniscoreITT with 17000 and 2500 followers respectively.

You are the greatest talent Greece has produced in years, maybe in history – do you feel any pressure?

– Tennis is my passion. I am proud to represent Greece. My goal is to always do my best on the court, always be better. Pressure is just a word.

Where do you train in Greece in the summer? Are there any indoor courts nearby or do you simply practice in the evenings?

– I play a lot of tournaments in the summer in different countries so the warm climate of Greece does not interfere with my tennis.

Who do you train with at home?

– I work mostly with Theodoros Angelinos (866) and Paris Gemouchidis (formerly 582). Sometimes I practice with Alexandros Jakupovic (434).

How popular is tennis today in Greece and how well do you think it does against the more major sports in the country, such as basketball and football?

– Tennis is not as popular in Greece today but I still think that the popularity is increasing slowly. Tennis is however very expensive today.

Describe your strengths as a tennis player.

– The forehand is my biggest weapon, but I feel very stable in my ground strokes. Also my serve, when I feel it well.

Which players do you currently look up to?

– I like Wawrinka, Del Potro and Federer. Each one for their own characteristics.

Why, do you think, have Greece not produced an established ATP Player earlier, when tennis today is a global sport with players from all over the world? Could it be economic or traditional aspect that comes into play?

– Well, partly it is the economic part and also the organization of Greek tennis. Our nation is not as structured and disciplined as the other countries in tennis. I can only take Constantinos Economidis and Theodoros Angelinos as living examples. They were two very talented players who were hungry, disciplined and determined. They really wanted to do something with their tennis. That’s what it comes down to, how much you are willing to sacrifice. It is tough, and you must be able to manage to travel all year round and be without friends and family.

The players had no support from the Greek Tennis Federation?

– I’ve spoken to them and they have hardly received any help, just a couple of plane tickets.

Do you get any financial support from the Greek Tennis Federation?

– No, but I’m already sponsored.

The problems Tsitsipas are talking about are unfortunately something normal for many of the players on the Futures and Challenger Tours. Without financial support, it is almost impossible to take the steps into the ATP level, and some players thus have much greater ability to go all the way. While there is no guarantee at all of success whether you have financial support or not, the probability is of course much higher if you don’t.  That Economidis and Angelinos completely lacked financial support from the Greek Tennis Federation is of course shocking, but is at the same time says something about the country’s dismal status as a tennis nation.

You finished third in the U18 European Championship in Switzerland a few weeks ago, was it the highlight of your career?

– It was a good experience, certainly, but I can not say it was the highlight of my career right away. A good tournament simply.

What does a typical day look like for you as a tennis player?

– I wake up, eat breakfast and then go and practice tennis. After that I go to the gym, lunch, rest, once again tennis, swimming, rest and sleep. I forgot dinner as well.

– It is, absolutely. On Sundays I go to the movies though!

Have you dropped out of school or are you studying at a distance?

– I do all my courses through the Internet.

What have you to say about Mikael Ymer who is the same age as you, and additionally won the U18 European Championships?

– Mikael is a very good player with a great attitude. He really gives everything on the court and he’s always tough to face.

How does your schedule look for the rest of the year?

– I leave tomorrow for a 15,000 dollar tournament in Italy and then several Futures tournaments and Challenger-qualies are waiting for me.

We at Tennisportalen wish Stefanos the best of luck in his future tennis career and we want to thank him for taking the time to speak with us!